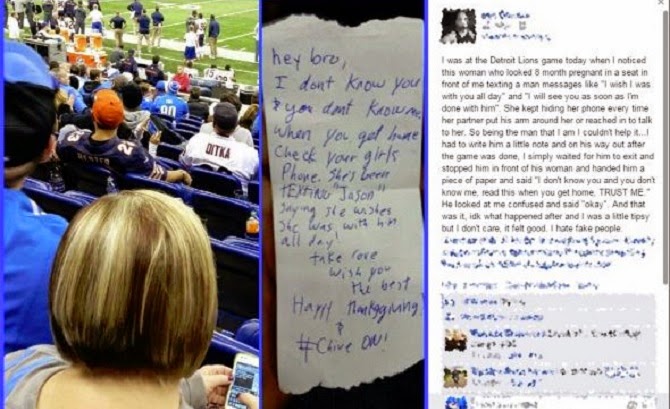 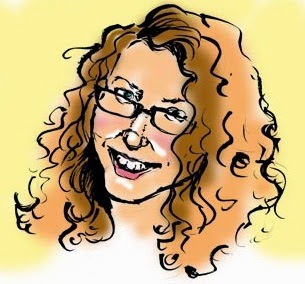 Makes me proud to be from Detroit. Did anyone see this viral Facebook post? Supposedly, this guy was at a Detroit Lion’s game on Thanksgiving Day when he noticed a pregnant woman in front of him texting another man when her partner went to the bathroom. He later slipped the guy a note, telling him to check his girlfriend’s phone. Then he posted about the encounter on Facebook.

“I was at the Detroit Lions game today when I noticed this woman who looks 8 months pregnant in a seat in front of me texting a man messages like ‘I wish I was with you all day’ and ‘I will see you as soon as I’m done with him,’” wrote the guy in a Facebook post. “She kept hiding her phone every time her partner put his arm around her or reached in to talk to her. So being the man that I am I couldn’t help it … I had to write him a little note and on his way out after the game was done I simply waited for him to exit and stopped him in front of his woman and handed him a piece of paper and said “I don’t know you and you don’t know me, read this when you get home. TRUST ME.” He looked at me confused and said, “okay.” And that was it, idk what happened after and I was a little tipsy but I don’t care, it felt good. I hate fake people.”


Wow! Let me first say that if you've ever been cheated on, know someone who has been cheated on, or are even contemplating cheating, you've got to visit the ChumpLady Blog, which I found by accident.  Your eyes will be truly opened on how the the victims of cheaters really feel.  Some stories will make you laugh out loud, and others will really make you wonder how anyone could be mistreated in this manner. More importantly, you'll find a phenomenal support group that works together to gain healing.

Unfortunately, as you read many of those responses, you'll be knee deep in the type of emotional abuse many have been subjected to due to cheating spouses. Real events of degradation, constant lies, gaslighting, financial loss, suffering children, and humiliation are just the tip of the iceberg.

This type of abuse is considered a part of domestic violence, yet it is swept under the carpet because no one has been physically harmed.  Yet the wounds are just as deep.  The way that some of these women and men have been treated brought tears to my eyes. To think that someone could be that cruel and insensitive truly bothers me.  Domestic Violence is still a silent crime.

If you are being emotionally OR physically abused, when it's safe to do so, please seek help from someone you trust, a pastor, or a domestic violence shelter.  No one should be mentally controlled or refused the opportunity to seek better lives.