THE NARCISSIST IN YOUR BED

According to Jeffrey Kluger, an author who specializes in narcissism, if you get into a relationship with a narcissist - run! (lol)
Unfortunately for us, the narcissist we've fallen head over heels in love with is a charming, charismatic person who swept us off our feet, and before we know it, just like a fish, we were hooked.  Ironically, narcissists start off being faithful, but because of their disorder and innate insecurity, they are destined to cheat, lie or become abusive. The neighbor next door, the clerk at the grocery store, your best friend  or that person at work just start to look better than you - prettier, curvier, skinnier, richer, more adoring, more quiet, more exciting, younger, older, or more willing to listen to untruths.  It won't be long before anything we say is not even listened to, we're blamed for everything that's wrong in life, there's an endless amount of complaints, we become emotionally or physically abused, bullied, and the lies to and out us will just keep on coming.  Soon, our lives are turned upside down and we become shells of our former selves.  The narcissist doesn't reject you because of who you are, they get rid of you because of who THEY are.  Have you ever caught someone in a lie and before you know it, you were yelled at for something totally off the subject?
Sometimes we have the tendency to throw the word, "narcissist" out there randomly at people with an inflated sense of self, but there really is such a condition known as narcissistic personality disorder (NPD).

The word narcissism comes from the story of Narcissus, a hunter in Greek mythology,  well known for his beauty and for being completely in love with himself. This all-consuming self-love resulted in his eventual death, caused by his becoming so attracted to his own reflection in a pool that he was unable to stop staring at his image.


Those with this type of disorder expect to be seen as superior and have a sense of entitlement, but even worse, have little to no empathy for others or their feelings, believing that he or she is smarter or better. This person has no qualms about taking advantage of others to meet his or her own needs. Narcissistic personality disorder has an average occurrence rate of about 1 - 2% of the population but has been found to occur as often as in 6% of adults, and it's more prevalent in men.
Biologically, narcissists are thought to have a tendency to have a smaller part of the brain that is related to having empathy for others, and psychologically they are excessively emotionally sensitive, despite appearing overconfident.  These people have received unrealistic praise, or much criticism, unpredictable care, emotional abuse and manipulative tactics from a  parent or caregiver.
Can this condition be cured?  Not really, unless a person is willing to go to therapy, and in most instances, he or she won't admit to doing anything wrong. Educate yourself and learn to recognize the signs, if possible. 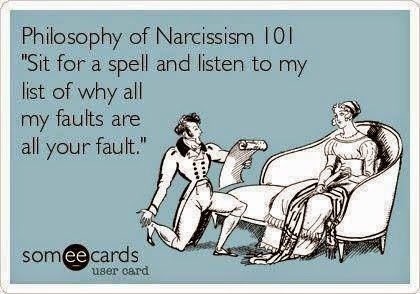 The Narcissist Next Door: Understanding the Monster in Your Family, in Your Office, in Your Bed— in Your World
Posted by RO at 10:01 AM